As you read this blog, I’m sitting on an airplane heading to Chicago to be a guest on the Steve Harvey TV Show.  I can’t tell you what emotions I’m feeling because I’ve felt so many over the past few days.   While, this is HUGE and I’ve received so many well wishes since sharing the news last Wednesday.   However, the truth is Steve Harvey isn’t going to be talking to me about my career.  He’s going to be talking about  the career of my husband! 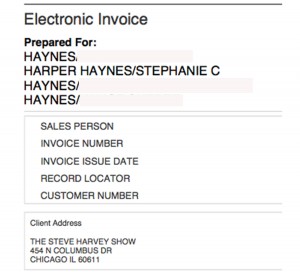 If you follow my blogs (both here and on the CAREER Magazine website), you know that I’ve been blogging about Meteorologist Rhonda A. Lee, but it was her appearance on the Steve Harvey TV Show that started this process.  After seeing Rhonda on the Steve Harvey TV Show, I decided that I would email Mr. Harvey and give him my opinion on the “Rhonda Lee Situation”.  I first posted on the Facebook page, then opted to actually re-submit my post directly to his website.  While on the Steve Harvey TV website, I noticed a show topic about men and sports.  For fun, I submitted about my husband who is the Head Football Coach at a local high school.  I was floored when I checked my voicemail and received a message from Natalie.    I returned her call promptly and everything else has been a haze (everything happened so quickly).

While my husband has a public career, this is a new “playing field” for him, and the whole idea of being exposed at a national level, was not in his playbook – – he knows who he is married to!  I’m embracing exposure with open arms because while I know my husband is the topic of the conversation, there is an opportunity for both my husband and I to enlarge our territories by and with this experience.   Anyone who thinks I’m going to sit in the room with Steve Harvey and walk out without telling him about the work I do, doesn’t know me that well.   In fact, I’ve already prepared a packet for him that I will put directly in his hand.

My husband and I have been to Chicago before and we’ve had a ball there!  It will be a first for my girls (who were also invited), and that alone is worth it.  My babies will never been the same (however they are only focused on riding in a limousine at the moment).  They are excited about meeting Mr. Steve Harvey, but they have to meet Jack Frost first as it’s expected to be 20 degree’s tomorrow when we arrive!

Never in a million years did I expected anyone to contact us about being on show, but I’m thankful they did.  I hope this inspires something who is reading this blog to take a risk on something they’ve been too afraid to do.  This is what it’s about ….taking risks and seeking rewards.  I have a few more things to do before we head out, so I’ll end this blog with a new meaning for R.I.S.K.