Recently, I came across an “interesting” fanpage on Facebook.  Since it was Friday, I decided to poke fun and give people on my personal page a Friday afternoon chuckle.

THEN….I posted that I was “hating because they have more likes than me!”  With an LOL of course (with all this political stuff, I’ve been trying to give people an occasional giggle). Soon comments began to pour in like rain.  Most of them were people who thanked me for the laugh, and yes some saying they were on their way to LIKE the page themselves.  By the time we finished having the hee haw, one of my very serious friends, told me to , “hold my chin up because while this page had more followers than my CAREER Magazine FB fan page, I had a more QUALITY product”.

Upon her review of the page (yes, she went to check it out too…lol), she discovered the interaction on the page was mostly from women who had nothing more to say than, “yes, nice, ohh laa laa, etc.”  She pointed out that when you read the comments on the CAREER Magazine page, that you see people being empowered, educated and lives being changed. (aww gee thanks!)

This made me reflect on a conversation I had with a board member when I first started having my monthly “Careers and Coffee” networking socials way back in 2006-2007.  Being the employment expert for the Reggie Gay Gospel Show, it was easy (and cost effective) for me to promote my events and get a packed out crowd to show up.  I noticed however, after about the sixth event or so, our crowd had gone from about 120  people to about 40.  I saw this as failure because I was measuring my success by the amount of bodies that were showing up (quantity) verses, the caliber of people that were returning (quality).

What I learned quickly is that I effectively communicated “there were be employers on site” so people thought Careers and Coffee was a quick fix, and a place where they could simply show up and get a job!  What I did not communicate effectively is Careers and Coffee was NEVER it was designed to be a quick fix, but a place of education and leads for employment.  You know, put employers and job seekers in the same space.  Job seekers still had the responsibility to be qualified for the position and convince employers that they were the best candidate for the open position.  But back to the blog…

Now when it comes to money, I have to agree, the numbers don’t lie, either you’re making some or your not.  But a persons degree of success, is certainly not measured in terms of numbers and numbers only.  Speaking specifically, about social media websites and the numbers of followers attached to them,  sometimes, we can miss our blessing in disguise, by thinking EVERYTHING  is a numbers game.  And I would be remiss if I did not mention that some people “buy” followers and likes (so don’t be fooled).   Some studies have shown only about 10% of the fan’s return to a page once they have liked it.  According to an article on Fast Company‘s website, we need both quality and quantity!

Experts have long debated just how big your professional network should be. Should you focus more on the quantity or quality of your relationships? The easy answer, of course, is “both.” Unfortunately, though, there are only so many hours in the day. Building and maintaining relationships take time; building stronger relationships takes more time.

Given that your time is limited, the number of your relationships and the average strength of your relationships end up being inversely proportional. The more people you know, the less well you know them. If you want to build stronger relationships, you’re going to have to do so with a smaller number of people. You can spend all of your time with your close friends and family (strong ties, low number), or spread yourself thin across a wide number of people (weak ties, high number). However, maintaining both high strength and high number is physically impossible. How can you find the proper balance between strength and number?

While I agree that both quality and quantity are important, but ENGAGEMENT IS KEY!  I love how this article points out that high numbers can equate to weak ties and low numbers can equate to strong ties.  Which goes back to what’s been said over and over, relationship building is crucial.  When you have numbers but no relationship with those people behind those numbers, it “looks good”, but its not always profitable.

By the way…my 19 friends who LIKED the page after my post are all quality people and damnhefine.com is available.  Should I buy it? 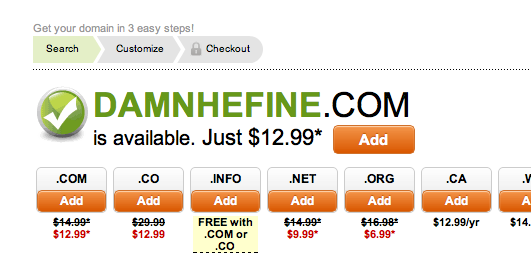 Disclosure:  My intent is not to do any brand damage to the brand mentioned above.  My goal is to simply share my thoughts with my network and give them something to think about  – – this just happened to be inspiration behind the blog post.

Previous: Is your brand borrowed?
Next: Didn’t Need Oprah Afterall…