Home » Blog » Uncategorized » The Color Purple is MORE Than a Logo color!

As I come to a close of the production of each issue of CAREER Magazine, I’m a bit frazzled.  Managing people and process has never been an easy task especially when everyone involved in the process is NOT following the same END OF PRODUCTION DATE!   CAREER Magazine is not my primary business, it’s an extension of service offerings and I have only a limited time to be in “production mode” or it begins to affect other areas of my business.  When I should be DONE with the issue and working on other things, I am still waiting on something from someone – which has a snowball effect.  If production is waiting; so it editing, if editing is waiting; so is the printer, if the printer is waiting;…you get the point!    Being a person who is a stickler for time management, this fries my nerves every issue.

Having fried nerves, I decided I needed a break away from the office to just clear my mind.  My auntie (yes auntie) and I took off downtown and decided to have lunch on the waterfront.  We opted for a Greek restaurant that neither of us had been to before and enjoyed the sun, the meal, and each others company.

Over lunch my auntie made the comment, “you love your work so much that you have on purple and you’re not even at work!”  She went on to say that “I love my work so much that I infused the color of purple into my branding”.  Truth is, I had on black, but my accessories were purple.  When I got dressed that morning work was not on my mind.  In fact, I was so frazzled with what was on my desk that I wanted to be as far away from work as possible.  The other truth is 80% of the items in my closet are purple or have purple in them. Why?  It’s my favorite color.

BUT….it’s not JUST my favorite color.    As a child, Lydia was actually my favorite Bible character and when people asked what do you want to be when you grow up I used to say, I want to be like Lydia.  Acts 16:14-15 tells us that Lydia was a ‘seller of purple’.  The Scripture says that God ‘opened her heart’ and she and her whole household were baptized as Christians. She is known and remembered for her appreciation and hospitality.  She was a faithful ‘sister’ sharing her home with the congregation even during difficult times(Acts 16:40).  She sold ‘purple’ (purple cloth and garments, and probably the dye itself). The term ‘seller of purple’ (“dealer in purple cloth”(NIV))signifies that she was a merchant, probably of some prominence, since she had a home large enough for the ‘brothers’ to meet in, and her occupation dealt with a costly item. The scriptures say that she was originally from Thyatira (now called ‘Akhisar’,150 miles from Istanbul). It was a city in Asia Minor famous for it’s dyes, particularly it’s scarlet or purple color made from the ‘madder root’. ‘Purple’ dye was VERY costly, and often associated with wealth and royalty (Luke 16:19).  While all of my other friends wanted to be a wife, like the Proverbs 31 woman, I wanted to be a business woman like Lydia.  I later learned that the Proverbs 31 Woman was ALSO a business woman, (though that is not how she was portrayed when I was growing up).

As I progressed in life, I learned more about the psychology of colors and the impact it has on others.  I learned that purple  is the SYMBOL of royalty and wealth and REPRESENTS wisdom, spirituality, leadership and trustworthiness.  Purple CONNOTES quality, luxury, romance, sophistication and it also rare in nature.  There were all things I wanted to be associated by and with (personally and professionally) so purple being my favorite color is not just about “the look of it”.  I was always drawn to purple, but after learning more about what it represents and how people respond to it, I made the decision to also be a representative of purple and all of it’s attributes.

Purple (and red) were my favorite colors as a child and long before I decided to open a business.  When I decided to open a business, choosing purple was strategic.  Several studies show that colors also play a major role in how (and why) consumers buy.  Purple represents the relationship between my customers and me.  I wear purple 80% of the time because those are the PERSONAL attributes that I choose to INTENTIONALLY be associated with. 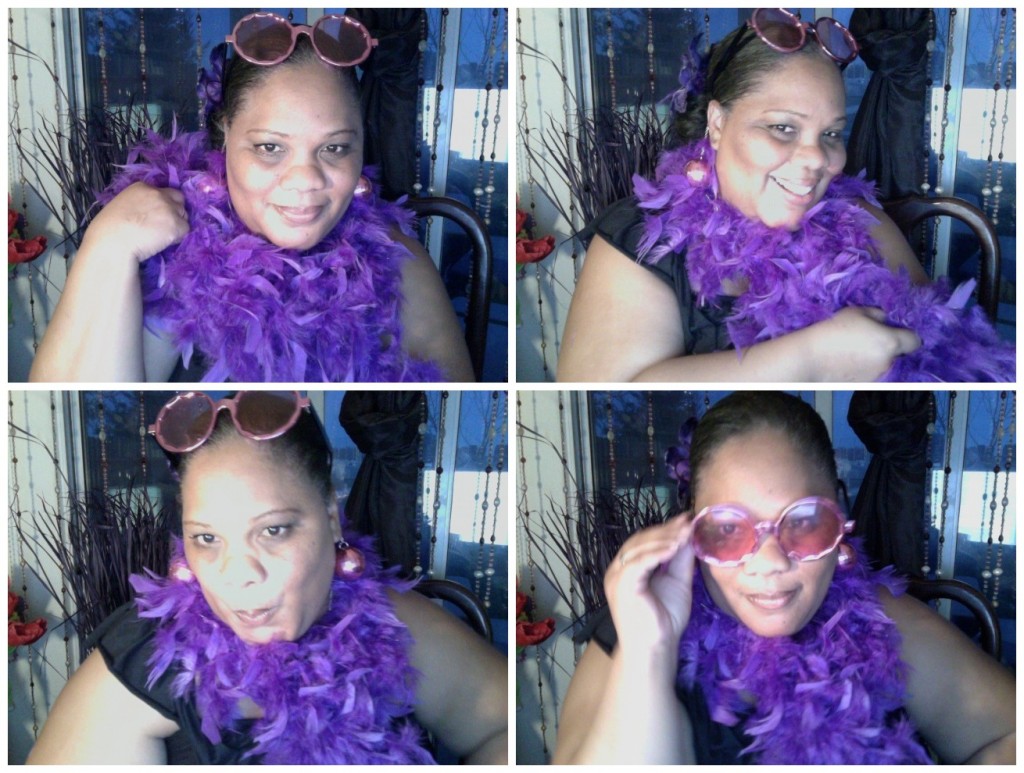 I’m using this boa in my next workshop and I recorded a video with it last about being Authentically You!  Subscribe to our Youtube Page and see it when it comes out later today!

The moral of this blog is, if you want to know why people do what they do, don’t make an assumption – ASK!  Your perception of WHAT people do and WHY they do it  is more than likely NOT even close.

What’s the story behind your branding?

Previous: Are you in kindergarten learning from a first grader?
Next: Are You A Guru Groupie?